Onto the West Coast Soaring Club Line group to pop a quick, ‘Anyone flying Bridal?’

Car loaded and out the door. I will likely be sitting around for a few hours waiting for a ride to show, but as the investment adage goes, “Better a year early than a second late.”

Sitting in the car at the Bridal LZ, AC running to stave off the increasing heat. It doesn’t take long for a car bearing an older gent in a collared shirt to pull up. Josef, an occasional pilot here in the valley.

Following him is a pickup with Chris and Shawn (the pilot from the Yukon who unofficially broke the Canadian PG distance record with a flight of 260 km). A little milling about occurs, hoping a ride shows up but no dice. Our quad of pilots piles into the pick up to make our way up to Lower Bridal.

Along the way Shawn recounts his adventures in Brazil, conversations with pilots planning to cross the Sierra Nevada range, and the Burning Man festival. Oh, and the general state of flying in the Yukon – the lone consistency lies in the lack of back to back flyable days.

Arrival on launch reveals some strange conditions. The west wind is completely absent and a pulse of NE cycles make their way through the trees just behind us. The outflow has yet to completely subside.

Shawn kits up and I give him a hand layout the wing out, ribbing him with a “I just wanted to touch the highest performing PG wing in Canada.”. It takes little time for a cycle to come through and Shawn is away and climbing out.

Chris is not far behind.

In the meantime, Andrei, Elena, Tyler and Kirsti have arrived and hiking up with a family of ‘launch tourists’.

Launch is about to get cozy. Go time.

Thirty minutes later Elena has set up above me and is starting to feel the afternoon heat. It is starting to roast out. A puff of a cycle comes through and Andrei points out, “Looks good.” Not hard to tell he wants me to hustle so Elena can get away quickly. Wouldn’t blame him in the least. Two sets back and the wing just drops. Not strong enough for a reverse. Switch to a forward. I hear the right tip thwack during the run but don’t feel it.

Away from terrain and scan for traffic.

The radio chirps to life, its Andrei…

“You have a small cravat on your left tip.” Glance up, the trailing edge tip is caught in amongst a few C lines. One pump of left brake. No effect. Quickly grab and tug the stabilo. Clear.

It is situations like this where SIV training pays its dividend. One of the quirks of the sharknose on the Delta 2 is the tenacity of the cravats. Previously working through these makes for quick work in the real world.

Everything squared away, off to the mixing bowl we go. Except with the lack of wind, there is no mixing bowl today. Just a wide swath of gently rising 1.5 to 2.0 m/s air. Over Alan’s Ridge and beyond. Approaching the next spine things spice up a bit and I start to bank into a carve. The rising air draws me towards the side of the mountain. I look down and east to see a road leading towards what I suspect is Upper Launch  A sudden chill to the air signals the end of the inversion.

Mind you, I am not entirely sure which peak Elk is, just that Elk is at the end of this ridge and that is where I am going.

The air begins to take on a sporty flavor with my first (and only) collapse of the day. I am near the lip of the ridge either in rotor or mixing thermals from both sides of the ridge. Not sure how much worse it will get, I decide to take a prudent path – push out front.

Oh well, return to the churn and backtrack to the bowl behind launch.

Several rivers of thermal crawl up the mountain to my right, beckoning the nose of the Carrera. One in particular causes the Carrera to go full on ‘pit bull’, the nose snapping right and charging in for the kill. My view immediately fills with tree covered hill side. Hard right to force the wing to do a three quarter turn to get back on heading. I make note of this spot to revisit at another time, today is not the day for tree top kicking climbs.

Back to the bowl to see Kirsti climbing in a right hand turn. I blend in from outside and just behind but don’t find much (1.5m/s) compared to the strength of the climbs closer to the ridge line (3.0 m/s).

Back west, again. This speaks volumes to my lack of patience.

I settle for a triangle route. Back down the ridge, out to the highway, back to lower.

The glide out to the highway initially has some decent chop (more hints of rotor?) but smooths out nicely. I am able to grab a drink from the Camelback and flip through some Podrunner mixes on the iPod+iHome mini speaker on the flight deck. Out in the valley, the west wind is picking up. There is a risk of being forced to back into the LZ if the wind climbs much more.

New plan: Play it safe, tag Lower, and set up to land.

The remainder is uneventful with landing coming up about 15 feet short of the cones. I watch other pilots work the ridge just downwind of launch, varying between standstill and crawl. I am sure the winds will die off as the sun sets. There are no regrets on my end for calling it a day early.

Just about to leave, I am paid a visit by a fellow flier who seemed quite content to stick around for a few minutes. Didn’t have much to say, but then again …

Those who do can’t explain, those who don’t can’t understand. 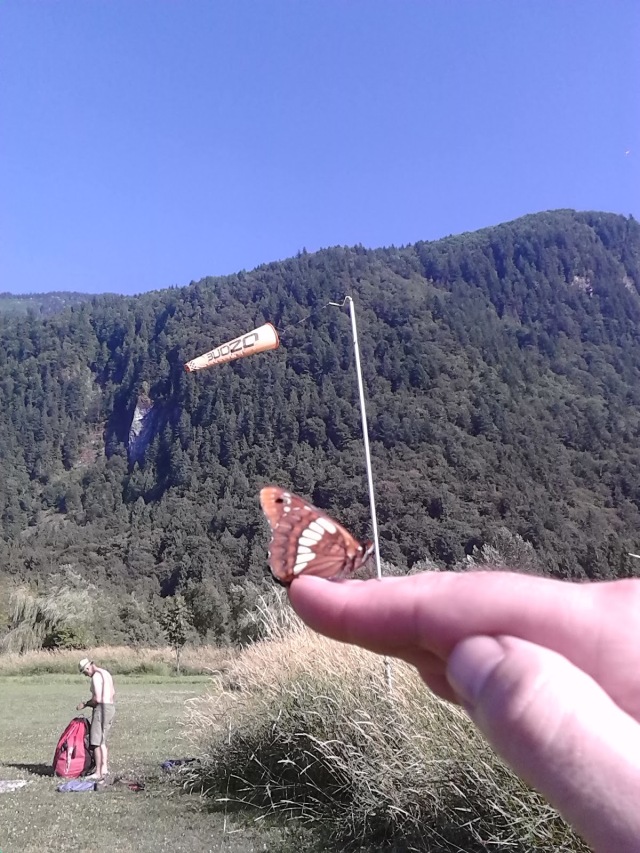