I can honestly say at this point that I can no longer recall each of the stalls that I have done. But I can say that if one does result in a cravatte (about a third of them have so far), it is a right SoB to get out with this wing. Once the lines wrap tight on the rod embedded wing tips, I know my SIV flight is all but finished due the time required to correct and the limited altitude between launch and landing.

If the cravatte is a simple wrap around, brakes may work, but the stabilio appeared to be the best first option – clearing the problem almost every time vs wasting time/altitude on 3 or 4 deep pumps on the brake with uncertain results.

In a line wrapped wingtip scenario, forcing a one third asymmetric on the cravatted side appeared to work the best. Single hand tugs on the stabilo didn’t work at all, hand over hand was hit and miss – I stopped hand over hand when the wing began to turn and dive.

Re-stalling was not attempted as the wing was controllable and altitude limited.

So, a word for new owners, the wing is in most respects rock solid. Collapses are very few and far between, with ample warning. When a collapse does occur, it is mostly a non-event. But if a collapse brings about a cravatte, keep in mind clearing it can take a fair amount of time and, in my case(s), bolder solutions up front proved more effective in terms of height loss. YMMV.

Outside of SIV flying, I managed to get a pair of short (30 and 45 minute) free flights in when the valley wind exceeded the safe maximum for a reserve toss over water. Today’s was particularly interesting as the wind was gusty and frequently exceeding the trim speed of the wing. Bobbing on a rolling sea of gusting air. I finally pulled ears (which flapped quite a bit, but not unexpected given the non laminar nature of the wind) and set up for the elevator ride down/back right at the upwind edge of the field. Just as I passed the wind gradient, the wing started creeping forward. A touch of the brakes and back up I went. Repeat one more time and I just went hands up, sunk to about 5 feet off the ground, and all but kicked the hedge at the north end of the field. A gust then sent me sideways to the right, towards a sign post. While still flying the wing, the right foot went up and out, pushing off the post as I set myself down and drop the wing over the hedge. A four foot overshoot on a field several hundred feet deep. The title is a comment from Jocky during the retrieve, and well deserved – target fixation on maintaining my ‘base’ on the up wind side of the field, as opposed to repeated touches on the brakes to back in. 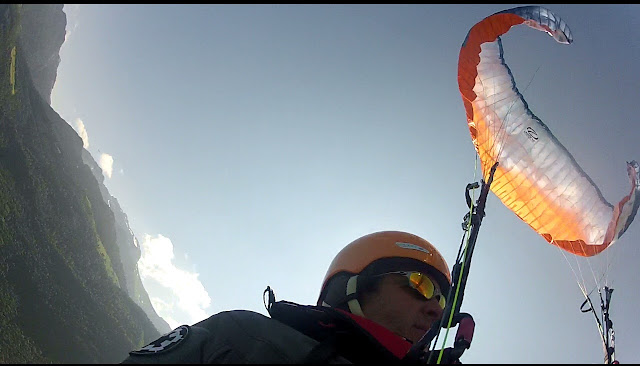