Gear, clothing, suitcases torn apart and strewn all over the hotel room.

After having flipped the room twice since pulling everything out to recharge, it becomes quickly apparent that my radio is no longer in my possession. A dreadful certainty fills me on where it is, the hayed field in the middle of nowhere that I landed in the evening before.

A plan forms. It is extremely unlikely anyone would walk the maze of dirt roads I took to get out since I landed and it is equally unlikely that a farmer will work the field right at sunrise the next morning.

The only things up and about are the rosters, the local constabulary, and myself. Winding my way along dirt roads, through fields, and over rivers I come upon my landing field to see sitting in the wet hay one black Yaesu VX-8DR.

Back at the hotel by 7AM, I find myself tired but content. Replacing a radio in an area with so few amenities/shops would be next to impossible.

A few hours pass and our group meets Kelly on the hotel restaurant patio for an overview on thermal carving and mapping, along with the meteo conditions. Today is looking like a ‘fizzy’ day -> low cloud base means the notorious Bassano inversion has taken a day off and the thermals can be expected to be frequent, short lived, and soft edged.

We set off for the high launch to the east. Setting up our kit at 1,500 meters, we are all but touching cloud base without leaving the ground. Kelly makes it clear not to enter the clouds and that if we are getting sucked in, push out away from the hill where the clouds have yet to invade the flatlands.

The plan from Kelly was for him and I to launch last, herd up what cats were still in the air, and head off on an XC.

A comms issue with Kellys radio left me out of contact with him for 10 minutes and I figured he wasn’t going to fly after all.

New plan, free fly a 15 km triangle along the ridge, into the flats and back. An increasing northwest head wind up top frustrated my final leg, and down I went.

An out landing, a missed lunch, and a chastising for wandering off.

Half an hour after getting back to the hotel, I pile my gear into the van and off we go again. Not one to push the ‘bad pilot’ button too many times, the instructions are clear – stay up one hour, land at the hotel garden.

One hour after launching, I am alone in the air and make my way out to the flats. One of the Brits, Matt, very kindly radios up to ask which beer would I prefer on landing. Incentive to head down, if there ever was one.

Snap off a 90 degree turn above tree tops, surf in the Delta 2 hot, I land, turn and set it down in front of a crowded hotel restaurant patio. I do love this wing.

Must be a panel of Russian judges today. 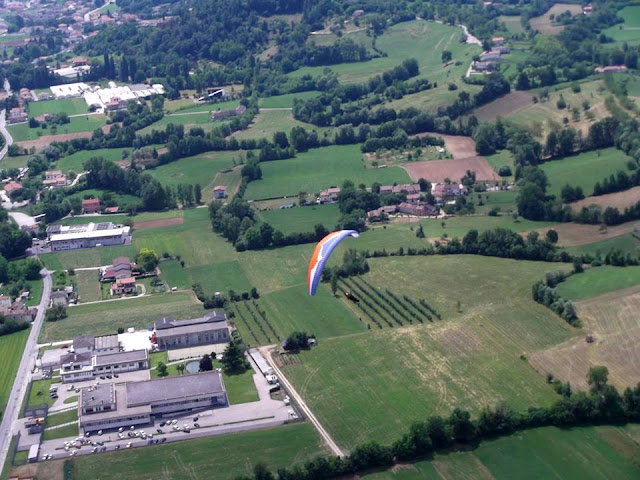