Despite dire forecasts, including “Paragliding not recommended today in Vancouver, Chilliwack, Whistler, Pemberton, Bellingham or Seattle.“, options were being put forth – Blanchard, Whitby, Pemberton and Woodside.

By 1030 a consensus with a group heading for Woodside, expecting little more than sled rides. The weather this season has frustrated many of us to the point that we will take whatever airtime we can get.

A glance out the window hinted there may be more than sled rides in store, with the sky starting to clear. A coin toss of sled rides vs. overdevelopment.

Noon. Meeting up with George, Martina, Lee, Andrei + 1 (I wasn’t sure of Plus One’s name, he was rather quiet), we pile into one vehicle and make our way to launch. It doesn’t take long before Norm, Bev, Alex and Nicole appear and round out the days hopeful airborne cohort.

The sun is more or less absent with high cloud. The winds contradict the macro forecasts and are in fact consistent with CanadaRasp and the Phil Ibis windgram -> light W to S/W.

George is first off, as usual, and heads south. He is quickly followed by Lee and Martina and the trio of Skywalk wings scratch their way along the south knob.

Even with the sun blocked out, the combination of high lapse rate (forecasted by the Ibis wind gram up to 800m) and the ambient light is enough to form thermals. Looks like a textbook example of what Kelly would call a fizzy day with frequent, short lived, wide gradient thermals and a low cloud base.

Now queued up on launch is Tonya, all smiles with her brand new polychromatic Sky Country EN-B ‘Scooter’ (I suspect a chant of ‘Faster! Harder! Scooter!’ would be lost on this crowd).

Tonya launches and heads north in opposition to the Skywalk triumvirate. Looking at how quickly she climbs out, I gather north of launch is the place to be.

I follow Tonya, both in queue order and in turning north. The mini ridge separating launch and the north rock face is working, though requires a decent amount of commitment by way of kicking tree tops (see ‘short lived’ in the description of fizzy conditions). A number of figure eights later and just above launch height, I glide south to line up with the clear cuts and what the Flymaster Nav has guesstimated to be the wind at this altitude. 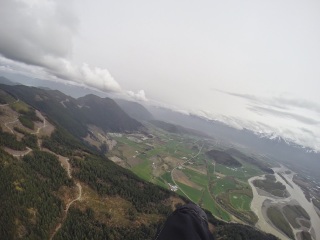 In the process of the climbing out, I am joined first by Alex, then by Nicole. The gravity defying duo begin the trek along the mountain towards Agassiz and I entertain the thought of joining them. Noticing how small a gap there is between the top of the mountain and cloud base, this would leave me little margin for error -> either ending up in the white room or cutting the edge of the CTR over Agassiz prison.

I stick with boating around above launch until my stomach and cold get the better of me about an hour later and I head to the ranch to land.

Bev had already landed, packed up, and about to get a ride back up from Derek for another go.

Round two it is.

Launching around 3PM, the cloud cover has cleared to the point that hard edge shadows can be seen.

Take a calm fizzy day, add sun and we end up with wings that are both shaken and stirred. While the climbs were not particularly strong (topping out around 3 m/s), the edges were now honed sharp – especially low over the new north clear cut.

A pair of small thwacks dictates a change in gears.

Bank it up and hold on.

My biggest weakness in this sport is my utter lack of patience and there are few things that test that patience more than circling forever in sub 1 m/s bubbles. So when fate smiles and provides me with a decent climb, I am all over it.

Only to have fate frown.

While cut a little short, all in all a great day and not a single sled ride.