Kelly has ambitions of a twenty-five kilometer FAI triangle.

Landing options abound within a single glide of the ridge until past Paderno. Our XC quartet are becoming accustomed with the rougher air over the ridge and have started demonstrating the ability to carve and coarsely map thermals. In essence, we are becoming semi-autonomous. Our trio is beginning to rely more on Kelly for route planning and marking climbs in more troublesome spots than feedback on technique (as opposed to where we were two weeks earlier).

That is not to say there is no feedback on technique, as there continues to be plenty of it. But each of us now knows what specifics we need to address on our own and just because the course is coming to a close does not mean the learning will as well. On this day, Kelly is planning to pull together the basics he has taught us and allow us to synergize the components into a proper XC flight under conditions more challenging than we have faced thus far.

On the hill, Jim and Tim are launched. Spacing them apart by 15 minutes gives Kelly time to guide each via radio. Based upon their rapidly improving performance, it is difficult to imagine their flight hours being so few and their background being exclusively coastal soaring.

With the clock closing in on noon, Kelly suggests to both of the newer pilots that they avoid the ridge as we approach the witching hour and directs them to continue practicing over the flats.

Magnus leads the quartet out, followed by Ollie, myself, then Kelly. Initially we were going to look for climbs over the mound to the left of launch, but the ridges to the right had lit up in the time since the departure of Tim/Jim for the flats. Now given several options, each of us could take a different climb and give our group the best chance of getting away – if one climb is lacking, a pilot can quickly leave it and join a better yielding climb found by a teammate. This is the paradox of paragliding, being highly individualized yet relying heavily on teamwork. This practice of pimping lead Olle and Magnus to share a single thermal while I begin to search more westward, towards a steep sided gulley.

Lift is readily available. Leaning in, carving, and mapping an ongoing thermal, it does not take long to lock in the core and drift back over LaCassette (the launch now infamous with our group due to a guide sheet description that included the words, ‘Do not launch east. Danger of death’). At the top of LaCassette, a pair of sunbathers lie unfettered by such a dire prediction. Attention lies solely with the sun and the ballet of wings overhead and could not be bothered by Chicken Little-esque ramblings on a piece of paper.

Staying true to its word, the Witching Hour arrives and brings some bite to the air. A slow, yet continuous, exodus of pilots for the flats begins. By the time I decide I’ve had my fill, Olle and Kelly are already several kilometers downwind, passing north of Paderno. None too keen to apply speed bar under these conditions, I plod along at trim speed and stay just at the edge of the ridge’s rough climbs.

I arrive just north of Paderno and face a crossroads, push out on the flats and risk sinking out OR try a climb up the 1500 meter rock faced ridge and receive another shellacking like I did the week before.

Creeping away from the cliffs lining the face of Panetone launch, I circle slow and wide. Looking for any tell tale of thermic activity, I continue moving cross wind and align myself with potential sources.

An intersection of flight path and releasing thermal.

The wing pitches back slightly and bites in.

Pause. The vario starts to beep.

The beeping continues. This one is large enough to turn in.

A carve is begun.

Opened and closed with each pass, the carve divides down the distance separating the core and myself.

The vario beeps grow in pitch and frequency.

The wisps of a cloud being born.

Kelly and Olle are within an easy glide. I join up with them over the small ridge line east of Paderno. We spread out, trying to find an elusive climb that will enable us to continue to the second leg of the triangle.

Ten minutes later, the ridge line delivers, allowing Kelly and I to continue southward. Olle remains, trying to top up before joining us. It is during this part of the flight that I begin to take notice of the wings tendency to ‘sniff’. One of the tips will pull back slightly and release, repeatedly. There is something in the air that is causing this reaction, though I have yet to identify how this relates to any nearby thermals. Likewise, I begin to work with the wing, rather than against – once the wing is in a carve, it will tend to pull towards stronger lift. Also, when the wing initially hits a core, it pulls back slightly, but quickly bites in. It is obvious it will take time to adjust to the style of flying the Delta 2 wants vs. my previous EN-B wings.

Gliding southward past Paderno, we pause over the same factory I landed beside the week previous. We are below 500 meters, the wind is picking up, and climbs are becoming disorganized. Every attempt to climb out is bound by yet another low inversion and becomes wasted trying to drive back into the wind.

I lose sight of Kelly while focusing intently on trying to work through the inversion. Patience (or lack there of) gets the better of me and I set down in the field. Packing up, I see Kelly low, yet making his way back to the hotel.

Post mortum of the flight reveals that this was one of the most challenging flights for Kelly’s thermalling courses and would rank on par with a decent XC course route.

Oh and yes, Olle and I missed lunch… 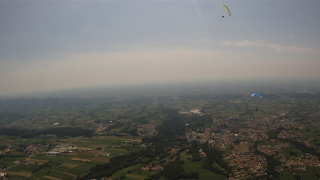