It is Friday and week one of thermal/XC training is drawing to a close.

A proper send off flight is planned for Matt, Paul, Bev and Maurice -> meet in the parking lot at 0730 and head up to the high (1500m) launch for a smooth 20+ minute sled ride down to the hotel LZ to grab breakfast.

The conditions are perfect, actually beyond perfect. Thermic cycles are already making their presence known on launch by the time we arrive, an hour after leaving.

After the mandatory group photos (‘everyone say fromaggio’), the crew kit up and launch in rapid sequence. The cycles are allowing later pilots to actually climb 20+ meters above launch, lazily circling in wide, docile lift.

I am next to last to launch, figuring the conditions and huge launch slope will allow an opportunity to try out a variation of the forward launch that Kelly had suggested previously to fellow student. I call it the ‘refrigerator’, as opposed to the ‘boat tow’ I had learned as a student.

Once off in the air, I don’t waste any time playing with the others in the weak thermal to the right of launch. Instead, I pass by them and stay right along the edge of the ridge. Riding every little bubble coming up, I try to capitalize on the Delta 2’s remarkable speed and glide ratio. I can see that a pair of wings are considering following me, but they quickly veer off upon seeing that others in the group are climbing closer to launch.

I am left to my solitude as I continue my run further and further west along the ridge.

Directly to the north of the hotel and near the crest of the ridge, I arrive at a plateau adorned by a single homestead and a pair of pastures.

I pause and began a slow circle, trying to sniff out lift. This proves trickier than it sounds, as I had left my variometer on the charger in room with expectations of a sled run.

I did not have long to wait.

The wing pitches back slightly and signifies that I have come across a thermal. Relying only on the wing movement, brake pressure, and a visual confirmation of my height, I remain in the air for an hour and a half in extremely light lift, only turning towards the LZ when there is just 15 minutes left to breakfast service.*

It is remarkable how attuned one can become with a wing when a basic sense (the beeping of a variometer) is taken away. The pitch and dive indicate more or less perpendicular interaction with lift/sink, while drops in brake pressure give a sense of lift boundaries crossed by a wingtip.

With this flight, I begin to understand what Kelly means when he states that the skills he is teaching us are akin to learning to employ a watch makers screwdriver, when most pilots can only employ a sledgehammer. Light conditions such as these require smoothness, finesse, and sensitivity if one wishes to remain aloft.

Sometimes the best lessons are the ad hoc ones for which a lesson plan was not prepared.

* – The high point of this early morning thermal dance was arrival of an impromptu partner, a ‘local’. I had heard rumour that the local birds of prey frequently join in and remain with thermaling gliders, as our size and cast shadows tend to scare otherwise motionless rodents hiding in the fields below – effectively flushing out prey. 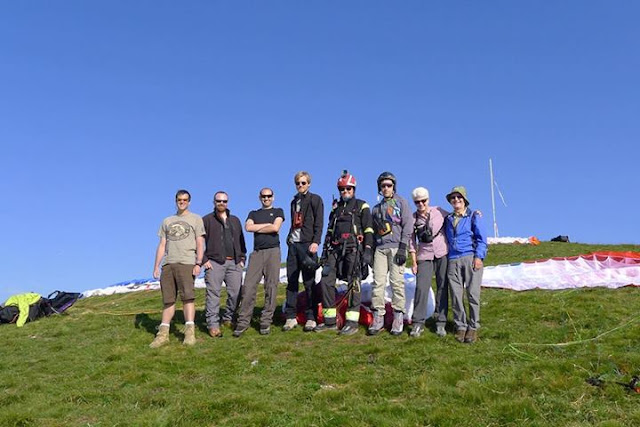